Some documents are agreements, others are contracts, but why does that matter?

What is an agreement?

An agreement is an arrangement or a promise between two or more parties to do or not do something. These informal and often unwritten agreements are also known as “gentlemen’s agreements,” where the adherence to its terms relies on honor, not enforceability.

Agreements are based on trust and aren’t legally enforceable with arbitration or in a court.

If one party doesn’t do what they say they will, the other party isn’t entitled to any remedy or compensation.

If you choose to draft an “agreement,” make sure you’re absolutely positive all parties will pull through in the end, or you may be stuck holding the bag when your deal falls through.

An agreement will always have the following features:

An agreement is often seen as a prelude to a contract. Before you can even write a formal contract, both parties have to hold a “meeting of minds” to ensure they’re on the same page.

Are there any agreement examples?

Although you don’t need to put your agreements in writing, professionally designed agreements are a vital ingredient to most business relationships.

Large corporations, freelancers, and everything in between can use agreement templates to help structure their business deals.

Here are a few agreement examples you’ll likely use:

Contracts are often called agreements. If your business partner asks you to sign an “agreement,” ask if it’s legally binding. If it is, ask them to draft a “contract” instead.

Alright, what is a contract then?

In the business world, the term “agreement” is common parlance for “contract,” making it difficult for legal newbies to understand the difference.

Pop quiz: is a non-disclosure agreement (NDA) a contract?

The answer is yes. Why? Because an NDA is a specific type of agreement that meets certain requirements designed to create legally binding obligations.

An NDA, despite it being called an “agreement,” is a formal arrangement between two or more parties that’s enforceable in court.

A contract will always have the following features:

A contract isn’t considered legal by itself. The person who drafts the contracts must ensure that all parties accept the terms outlined in the document via verbal confirmation and a signature.

If one or more of the parties involved don’t agree to said terms, they can negotiate the contract.

What are the most popular contract examples?

Contracts, just like agreements, don’t have to be in writing.

But, if you use contract templates, you can streamline your workflow and standardize your business terms and obligations. Business leaders and independent contractors need contracts to protect themselves from legal exposure.

Here are a few contract examples you’ll likely use:

Most contracts are pretty standard unless they involve selling goods or services. For example, a catering contract would cover your costs, duties, and what you expect from the other party.

Looking for a way to automate your contracts flow?

Learn more about PandaDoc where you can customize, negotiate, and eSign complex contracts. What’s the key difference between an agreement and a contract?

At first glance, a written agreement and contract look similar, but key differences in the two documents make the distinction more obvious.

Here are a few ways you can instantly tell if what you’re looking at is either a contract or agreement:

Contracts should always be written to protect the parties in the event of a breach of contract.

Remember, only enforceable contracts can be disputed in a court of law.

When a contract must be in writing?

It’s good business sense to put all contracts in writing, but there are some situations that can’t be enforced without one.

Since US state law dictates what can and can’t be enforced with a contract, the US statute of frauds requires the following contracts to be written, or they won’t be legal.

It’s an absolute thrill to close a deal that provides optimal value to your clients, but waiting around for them to sign is a major pain. To ensure your contract gets signed quickly, set a firm timeline and deadline and follow up with your client when the deadline has passed.

Can you create a contract without meaning to?

Yes, it’s possible to find yourself in an implied contract.

An implied contract can exist if:

For instance, if your neighbor shovels your driveway and you acknowledge their helpfulness, you may find a bill on your doorstep.

If they continue to shovel your driveway for several days, weeks, or months without you telling them to stop, you’ve created an implied contract and may have to pay them.

There are two types of implied contracts:

An implied contract can be taken to court, but it’s unlikely to be resolved without a written component.

However, as long as the contract has offer and acceptance, consideration, and competence, there’s a possibility you could be sued and lose your case.

Since implied contracts are legal, you must state your intentions before a situation gets out of hand.

This includes telling the neighbor that shoveled your driveway that you didn’t ask for their services, nor did you hire them or intend to hire them to complete this task.

Should I get an attorney to create a contract?

Only a lawyer can advise you on whether an agreement or contract is binding and what obligations or rights you may have if there’s a breach of terms.

However, attorney fees are costly, and it’s unwise to do business without one.

Contract vs. terms and conditions and when they are needed?

The terms and conditions outline the rights and responsibilities of both parties.

This can include special or general conditions. When a person refers to the terms and conditions, they could be referring to the entire document found on websites or a section located in a contract.

Here are some ways you can tell a contract and terms and conditions apart:

Put a terms and conditions section at the end of every contract you draft.

That way, you can include special conditions, like price variations and penalties, within your legally binding agreement.

Contract vs. a memorandum of understanding and their key terms

A memorandum of understanding (MOU) is an agreement between two or more parties outlined as a formal document.

The MOU is often used as the starting point for negotiations and is often seen in international negotiations. MOUs aren’t legally binding documents, but they can lead to contracts.

To tell a contract and memorandum of understanding apart, consider the following:

Under U.S. law, an MOU is treated the same as a letter of intent.

Learn how to improve your creation, tracking, negotiation and fulfillment processes, all for a fraction of your current expenditure. Why a written contract is better than a verbal agreement?

For example, writing a cancellation of lease agreement can ensure that your landlord doesn’t sue you for damages incurred from damages that weren’t yours.

Without a contract, it’s the landlord’s word against yours, and more often than not, your landlord will win the lawsuit.

Even when you fully trust a person, the exchange of capital can sometimes turn the best relationships sour. Always draft a contract just in case.

How to make an agreement into a contract

Turning an agreement into a contract isn’t as easy as 1-2-3, but it isn’t as difficult as algebra.

A modern contract contains several smaller formal agreements that are merged into one document.

For example, a contract may need terms and conditions, or you may need to tweak a debt settlement agreement to make it legally enforceable.

Other things you may need to add to an agreement to make it a contract include:

When an agreement is breached, those affected can’t seek counsel, but they can if they create a breach of contract.

Although some penalties are prohibited, most businesses can receive monetary compensation for a breach.

Boilerplating refers to standardized copy, text, documents, or procedures that are used over and over again.

In law, boilerplates are used to ensure contracts adhere to state statutes and rules.

Contracts must state which jurisdiction holds legal power if a dispute occurs.

Since every state handles disputes differently, all parties must know where they can go to seek remedies or whether the arbitration will be used instead of a trial.

It’s easier to start with a contract template and remove elements to make the contract non-binding.

Use a contract to maintain legal compliance

Knowing the difference between an agreement and a contract could save your business.

Although you could draft a contract yourself and take it to an attorney, you’ll save more time and money when you use the right content management tool filled with legally binding templates.

To take advantage of PandaDoc incredible contract templates, agreement templates, and 750+ other fully-customizable templates, sign up for a free 14-day trial with us today. 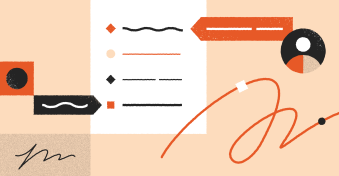 How to amend a contract after signing

A cringe-free guide to writing an LLC operating agreement